Regarding Reintroductions: The Lynx and the Beaver

“For us humans, living alongside wildlife often leads to conflicts. Sometimes we are scared for our safety, particularly when sharing the landscape with animals that are larger and more powerful than we are. Sometimes we become angry when our livelihoods are impacted upon. And sometimes we become annoyed when wildlife hinders us from doing the things we enjoy doing in our spare time,”

David Hetherington – From his book “The Lynx and Us”

From an ecological sense, there have been many studies in Scotland regarding the feasibility of bringing back this apex predator. However, it is people’s beliefs and perceptions that have not been so fully assessed. Lynx to Scotland is a collaboration between Scotland: The Big Picture, Trees for Life UK and the Vincent Wildlife Trust that, as of January 2021, is building a comprehensive social study of communities that may be living in plausible areas of reintroduction.

As a charity solely based around the protection of a reintroduced species, and one that was brought about after the evidence of escaped beavers into Tayside, it seems too easy to start arguments based on whether or not lynx should be released back into Scotland. So, instead, the following is an introduction into the discourse of beavers and lynx in a completely optimistic but plausible “wild” of Scotland.

Prior ecological research has taken place, using examples and evidence from across Europe, in which researchers have marked out likely areas of habituation and natural population expansion across Scotland. This is complete and evident in both lynx and beavers by researchers and government bodies respectively (see below). At first glance, the maps show clearly that the two species would certainly cross paths, but to what extent?

“Initial findings suggest that the Highlands of Scotland possess enough well-connected habitat to give a reasonable chance of a lynx reintroduction being successful. However, appropriate site selection is critical.”

In a world where populations of both lynx and beaver reach their full Scottish potential, it seems the main areas of confrontation may be north of the central belt. We have seen how successful beavers can be in Tayside in securing territories and adapting to the anthropogenic pressures of 21st Century Scotland, so there is little doubt that they wouldn’t thrive elsewhere. Lynx, however, are a bit pickier. They require large territories, ranging from 20m2 to 300m2 (prey density dependant), and are seldom seen in open areas, relying on the dense cover of boreal and temperate forests. So, it seems the likelihood of beavers and lynx coming into “conflict” is rare, but not improbable.

The main cause for interaction between a lynx and a beaver would be that of predation. With Eurasian lynx being known across Europe to predate on beaver alongside other UK extinct species such as the European wolf and the brown bear. However, lynx are by no means beaver-specialists. Their main diet tends to consist of ungulates such as the roe and red deer, something we have in abundance in Scotland. Allthough, when food is scarce or opportunity arises they may feed on birds and smaller mammals, including the beaver. Overall, it seems little work has been carried out on the extremity of lynx-beaver interactions but it is likely any confrontations are completely opportunistic and randomly played out events. However, there is evidence of wolves adapting their behaviours to become beaver specialists in the Greater Voyageurs Ecosystem in Northern Minnesota, USA (find out more here), so who’s to say that couldn’t happen with lynx in Scotland.

One of the many things beavers have going for them is a strong sense of smell. As a prey species this comes in useful when detecting predators, and has therefore become one of the biggest senses that beavers rely on for safety. Rosell and Czech published a paper in 2000 which featured in Wildlife Biology. Long story (academic journal) short, it found that Eurasian beavers (over short terms) are deterred from feeding in areas where a predator odour has been sprayed, most significantly with odours of otter and lynx. So, although lynx may have minimal effects on beaver numbers through predation, there are implications for possible behavioural and even geographic territorial changes in beaver abundance. And this could actually be something worth looking into. The current issue of using lethal control and even translocation to eradicate beavers from “problem” areas is that new beavers will turn up to recolonise that land. So, there could be something in using a predator odour spray to deter beavers from unwanted areas during the sub-adult migratory period, halting the beaver from settling in an area and removing the need for control. But, this clearly needs more investigation.

What the introduction of lynx means for beavers in Scotland, in all honesty, is very little. There is very little evidence for direct confrontations between lynx and beaver across Europe. However, there could be many indirect benefits that lynx could bring. As an apex predator, their niche in the landscape is just as important as the beaver’s role as a keystone species and ecosystem engineer. With large enough populations, over time we could see a change in large herbivore behaviour, especially around watercourses and wetlands, which in turn could benefit the beavers in areas of overgrazing (similar to what has been seen in Yellowstone National Park following the reintroduction of wolves). But also, from an economic and social sense, with lynx you would expect greater protection for our countryside, with more funding and infrastructure in place to support an improvement in ecotourism provided by this species. Imagine paying for your beaver safari in a bundle with a bit of lynx spotting the next day. Sounds like a bargain to me!

Until February 18th, you can pick up David Hetherington’s amazing book “The Lynx and Us” for free courtesy of Scotland: The big Picture. Click here and use the discount code “LynxToScotland”

I hold a BSc in Countryside Management with a long interest in British freshwater mammals. I completed my dissertation on water voles and have gained a vast interest and knowledge on beavers since moving up to Scotland.

A fifth of Scotland’s beavers lethally controlled in 2019

Beaver in Bavaria: Lessons for Scotland 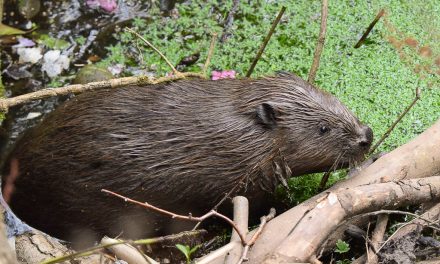 Beavers are to be legally protected in Scotland!